How to Turn Your Bathroom Into a Winter Wonderland

by Kasia McDaniel | Home decor, How to | 0 comments

Most of us decorate the inside of our home with a Christmas tree, stockings and perhaps some holiday decor on the dining room table or the walls in the living room. But have you ever thought about decorating your bathroom? Specifically the powder room. I’ve seen the kids bathroom decorated with holiday towels or even some festive soap, but I am talking about really adding more to it than just that. I did just that when I was asked to decorate a bathroom for the historical Weymouth House in Southern Pines, NC.

Each decorator at Weymouth House had to choose a theme and I chose Winter Wonderland. Using the colors of white, silver and blue, I started working on how to transform this bathroom into a Winter Wonderland. Here are some before pictures of the bathroom so you can see what I had to work with. 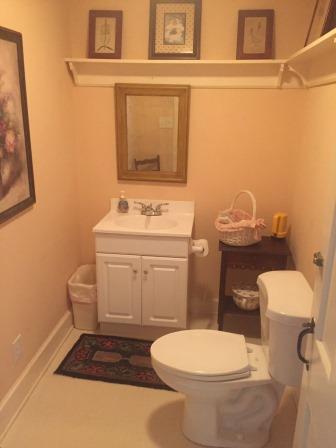 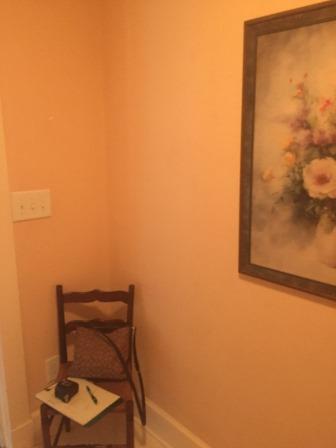 I decided some furniture in the Weymouth bathroom had to be removed starting with the side table next to the sink along with the chair in the corner. I initially tried to think of a way to hide the toilet but in reality, if you want to decorate your bathroom and still use it, it would have to stay as a bathroom. I also removed the painting and all the picture frames on the shelf that wrapped halfway around the bathroom. Finally at the end, I also ended up removing the mirror and replacing it with a more white mirror versus the brown framed mirror. Again, this was only temporary setup and you can always put everything back after the holidays. 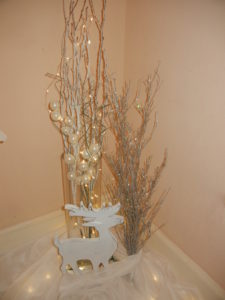 Now that the small table by the sink was gone, I had plenty of room to create a small display in the corner. Using a tall glass vase, I added some snow in the bottom of the vase using wadded up Halloween webbing. I then found some snow sprayed branches, blue sprigs and white holiday balls to the vase in varying heights. To add some more twinkle, I added some battery-operated lights to light up the vase.

Once the vase was done, I found a wooden reindeer and some self-standing branches that were sprayed in sliver glitter. Using the rule of three, my corner display was complete! I then wrapped the lights and sheer around the pieces to make it look like the snow surrounded it.

Now that the chair was gone in the corner, I brought in a tall white tower shelf to fit nicely in the corner. Because it was tall and narrow, it fit perfectly in the space. If you don’t have the space, you don’t need to add it, but I found it was a great way to display more Winter Wonderland items in a bathroom and creates some great storage you may not have! Once the tower was in, I found some more white and blue items to display on the shelves as well as some small washcloths and added some blue and white ornaments to make it more festive.

The wrap around shelf was another great place to add some Winter Wonderland items, but what? In keeping with the theme, I realized that Winter Wonderland should show something with kids. Kids LOVE to play in the snow whether it’s sledding, building a snowman or making snow angels. The pure joy on their faces is something you can capture with a camera. So I went in search of winter pictures of kids having fun in the snow. After finding some great shots, I turned the color photos into black and white photos using Canva. I already had some white picture frames, so I printed out the photos and placed them in the 8×10 frames.

More Christmas lights were added on the upper shelf and the picture frames were placed strategically around the room. If you don’t have a shelf, you can also hang a few around your bathroom or place them around your house in the kitchen, dining room, foyer or other places. Again, nothing is permanent and you can always change it back after the holidays. To help break up the frames, I found some blue metallic snowmen to place between the photos and add some more blue to the room.

A little horse drawn carriage was added on the lid of the toilet with some more “Halloween webbing” snow. A snowflake picture was hung on the large wall and a snowflake was hung above the toilet. The trashcan was replaced with a blue one along with a blue hand towel draped over the sink. Finally a wreath with some white mittens hung on the door to the bathroom to complete the Winter Wonderland look. Here are the pictures of the final room with the overhead lights on and then with just the Christmas white lights. 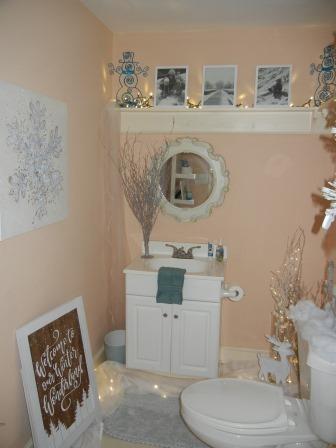 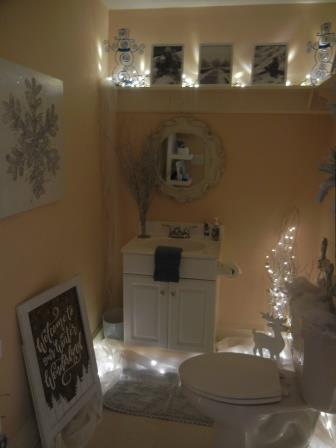 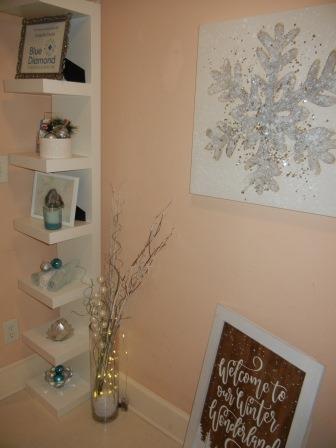 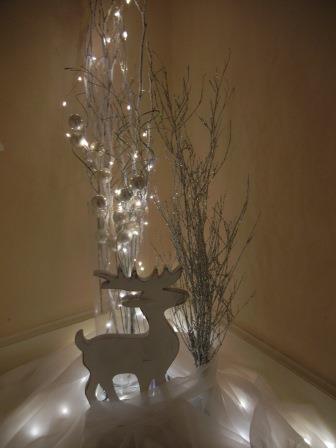 I also took a video of the bathroom so you can see the different angles of the room. Sometimes pictures don’t do it justice on a room. Enjoy the video!

Now that you saw the final Weymouth House bathroom, let me show you what you can do to a powder room. Obviously, I could not fit everything in the powder room because it was smaller. By paring it down to the few essential items I deemed necessary, I kept the lights and sheer curtain for the overall effect. The snowflake artwork was used again as well as a corner display that was edited for space. I loved the glitter trees and those were used as well in this bathroom. You can feel free to pair down items or add to it for the look you want in your bathroom. But be aware, once you start decorating a bathroom for the holidays, people might expect to see it again that way next year! 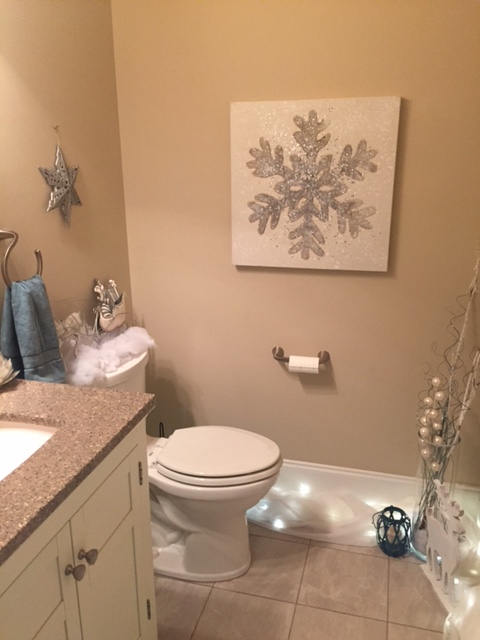 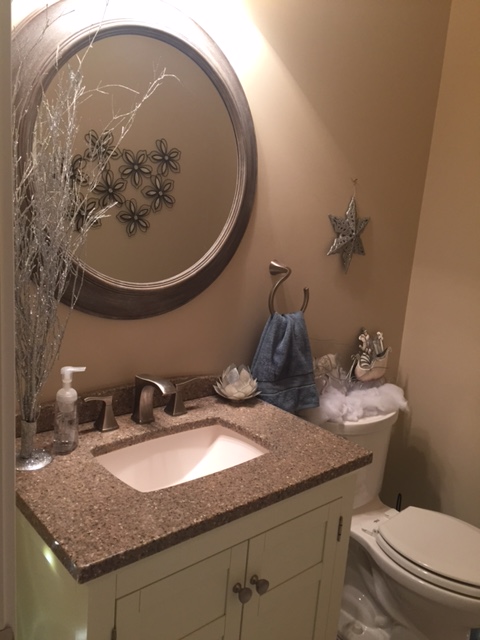 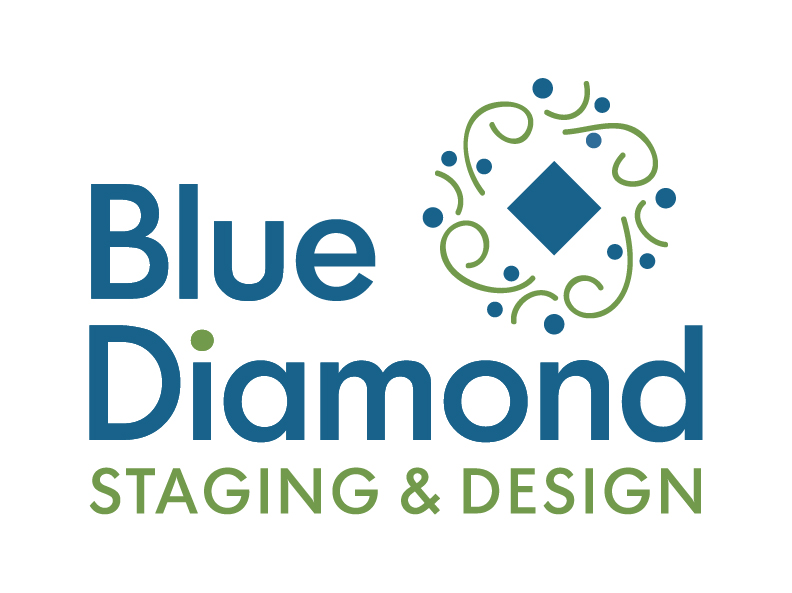 Sign up to get more free home staging/decorating tips!

We don't like spam either so we don't sell your email address.

You have Successfully Subscribed!