Hi, my name is Kasia McDaniel

So you probably stumbled over the pronunciation of my first name. Don’t worry, I get that a lot. It is pronounced Kasha (The first “a” sound is the same when you say “Father”). Kasia is a Polish name for Kate, which is short for Catherine. My birth name is Catherine but I have been called Kasia all my life by my Polish-born parents, and it stuck. And yes, that means I know how to make pierogi but cooking is not my passion.

Home staging and decorating are my passion

Homeowners hire me to transform their home into wow and get it sold now because most count the days it’s sitting on the market, the number of showings and the lack of offers. So I help them stage their home using things they already own to elevate the desirability of their home and get them out from under their mortgage. Bottom line, I boost the beauty of the home to get it sold faster.

I am a Home Stager and an Interior Decorator living in the Carthage, North Carolina area. I owned and sold 5 houses over a period of 9 years. I was in the Air Force for those 9 years and had to move every 2-3 years. We bought each home because we didn’t want to live on base. With each move, I prepared each home to sell by decluttering, cleaning and rearranging furniture to make it appeal to a buyer. Little did I know back then in 2007, this was part of the home staging process that has become so popular now.

Each home sold quickly (between 4 days and 2 months) except for 1 house in New Mexico. I made the mistake of posting pictures of empty rooms instead of leaving the furniture in place. It took 4 months to sell it which felt like an eternity! I thought everyone had the vision I had to imagine their stuff in the house. I was wrong and I hate to be wrong. This was one hard lesson to swallow because we were paying a mortgage on a house we already moved out of and a rental apartment in a new city and state.

However, as I looked at houses for sale, I noticed sellers didn’t do much staging, if at all! I wanted to take them by the shoulders, shake them and say, “Do you know you can sell your home faster just by doing x, y and z? Do you know that by not doing these things, you are turning buyers away?” This is part of the reason why I chose home staging as a career. Just like I had to be walloped upside the head to be a home stager, homeowners  need to be shown how they can get their home sold faster. And it doesn’t take much. Sometimes it’s just getting a fresh perspective from someone who has not lived in the home and seen the same stuff over and over again.

This site is dedicated to help homeowners get their homes sold faster by showing them how to appeal to the right buyer. I started blogging because I believe home sellers didn’t always get the message that they needed to do something to get their home ready. It isn’t enough to just clean the house. There is more to it than that now.

When was the last time you sold a home?

For some homeowners, it may be years and the real estate climate is different now. There are more expectations put on the homeowner that weren’t there several years ago. As a home stager, I am your guide to help you navigate those expectations and show your home in the best possible light. Peruse my articles on my blog or check out my You Tube videos on the expectations that buyers have when looking for a home.

For the latest information, please stay in touch with Blue Diamond Staging by subscribing to my free newsletter. I send short snippets of advice each month via email to help you sell your home faster or update it with something new. Also feel free to connect with me on Instagram, Facebook, or LinkedIn.

I love to educate homeowners on what they can do to make the transition out of their home a bit easier. I hold free seminars around the Pinehurst, NC area several times a year. If you want to educate your team or office about home staging, call me so I can do an office presentation.

I love to give back to the community! When I first moved to Moore County, NC, I visited the Habitat for Humanity Restore. It was a great place for treasures that you might need to stage your home. Plus I also found myself volunteering on CEO Build Day, where small business owners come out to help build a Habitat home and other projects. I attended a few dedication ceremonies but realized the house was empty when everyone came in to see it completed. So I suggested staging those houses using only items from the Restore. I donated my time to bring in furniture and set it all up so that it looked more appealing. My favorite project with them was decorating a house for Christmas! We used only items you could find from the Restore and then after the dedication ceremony, those who came in could buy the items and carry them away right there versus waiting to get them at the Restore.

Below are some pictures and a review from Kim Braddy, the Restore Director, in their monthly newsletter. 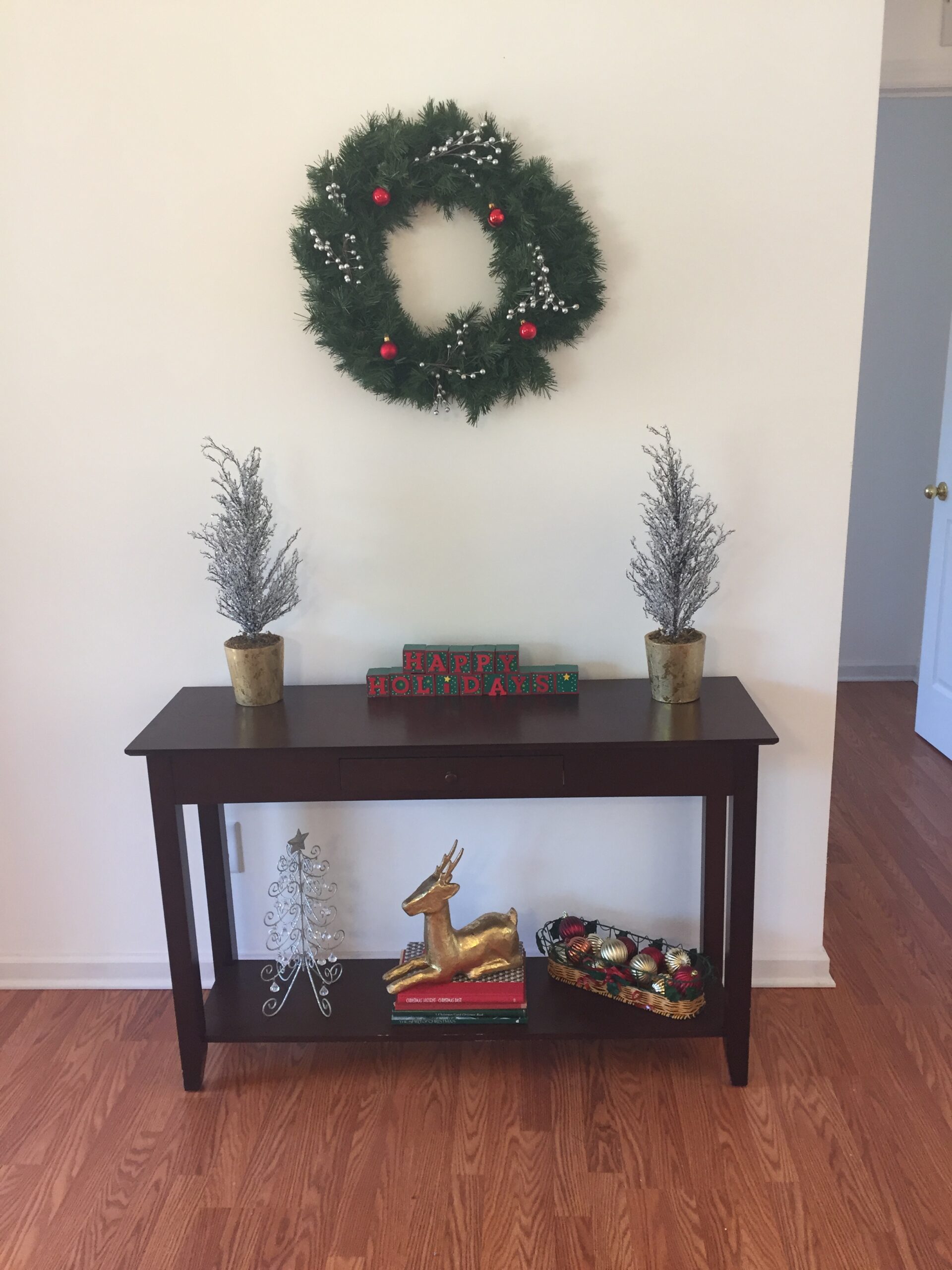 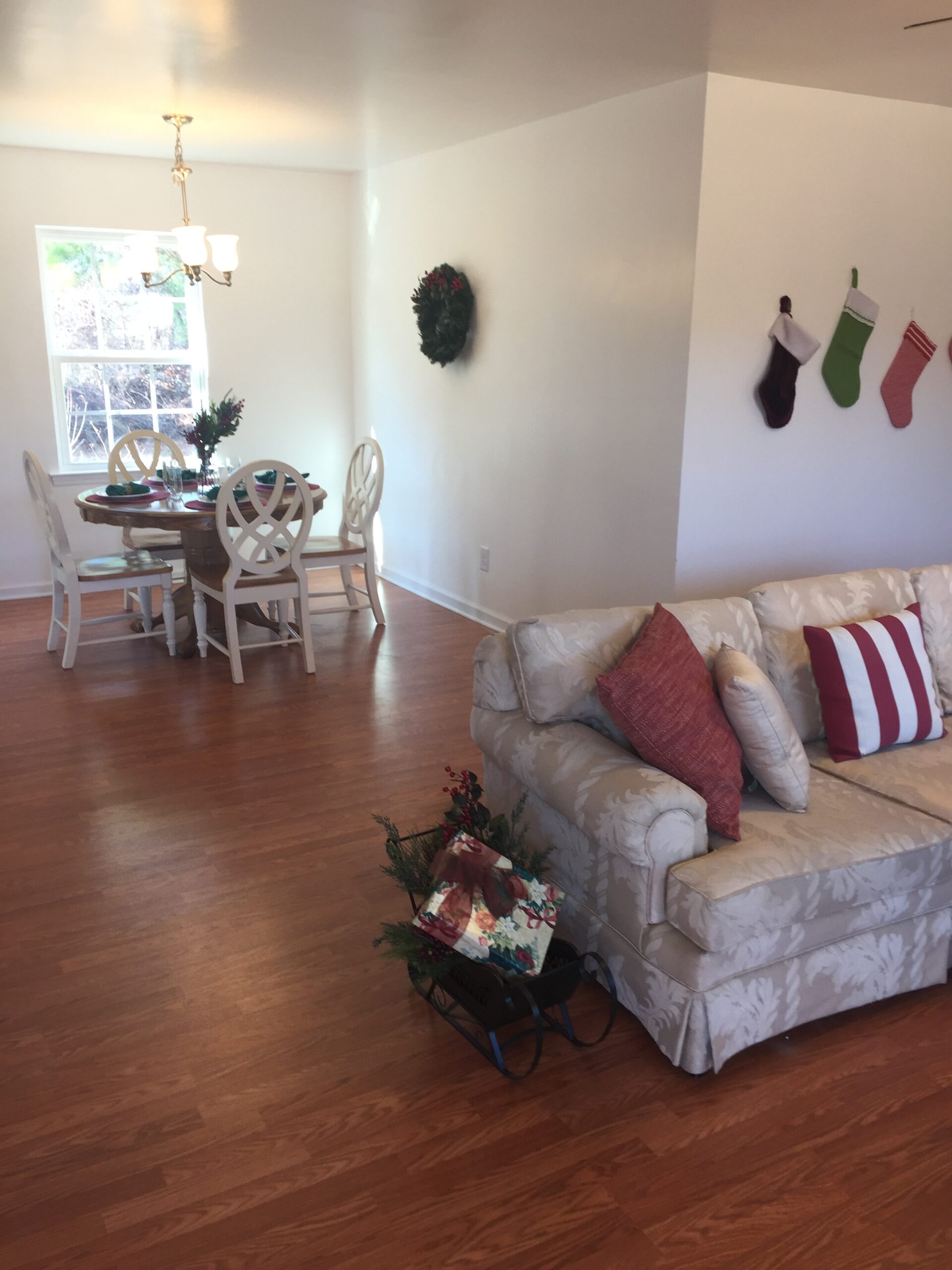 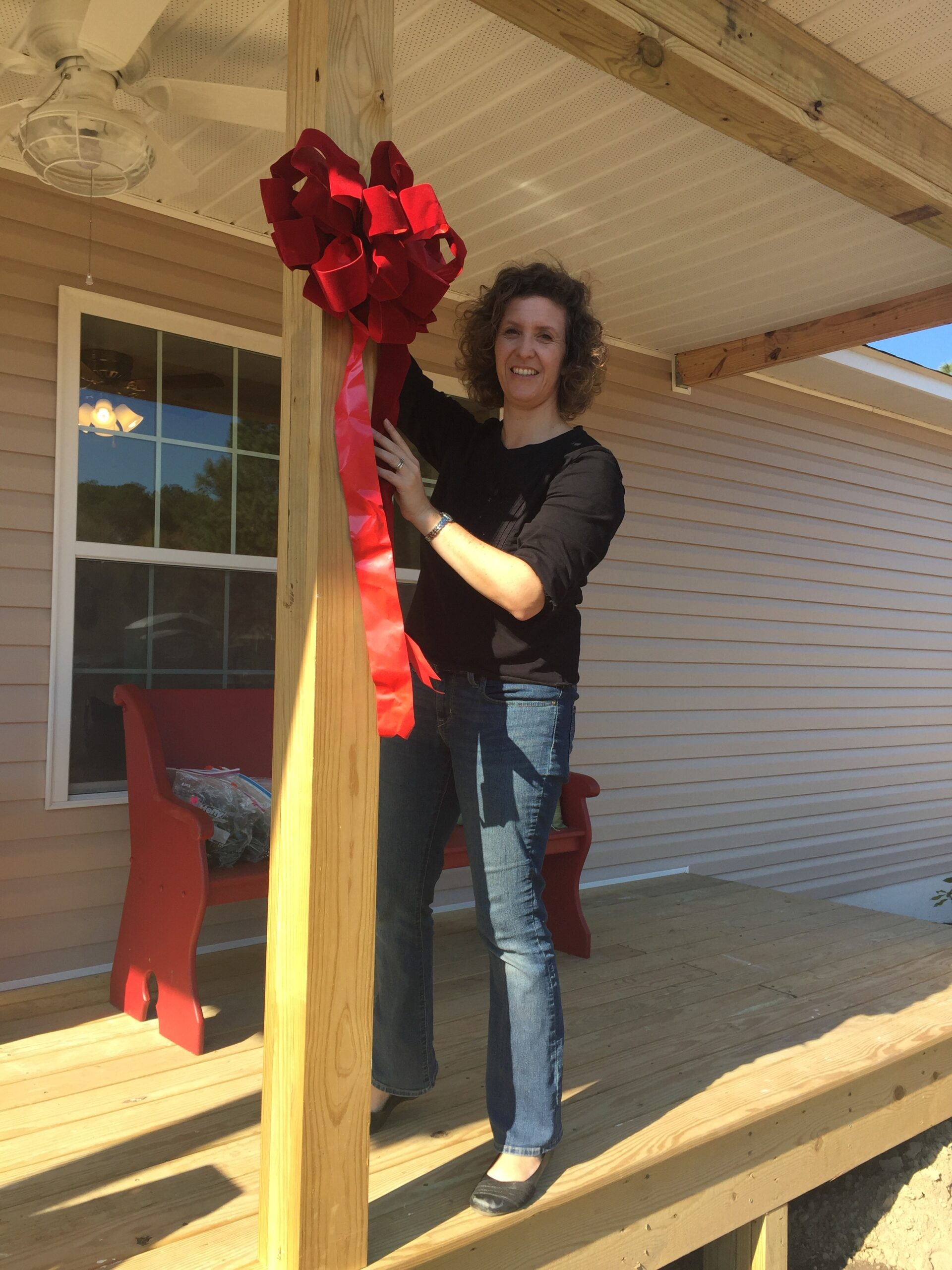 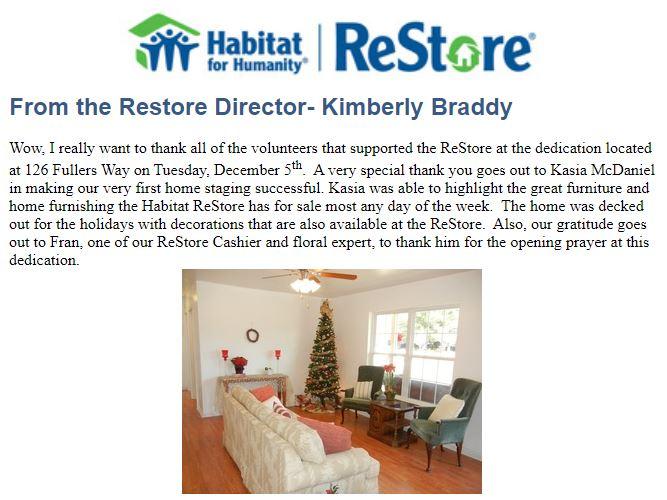 Home is where the heart is and my heart wants to help homeowners like you sell your home quickly. Don’t be like me and wait for 4 months (or longer) wondering why your house has not sold. Have a professional home stager come over to tell you what can be done to make it appeal to home buyers. The only thing you have to lose is one less monthly mortgage payment.

I'd love to hear from you