How Staging Helped Sell This House in 8 Hours

Many homeowners don’t know where to start when it comes to getting their house ready. That is why they call me to help them. I helped one homeowner who started the process and then called me to get the final details in place. Initially, the homeowner knew her kitchen needed some help. When I came in, the kitchen cabinets were already painted white and they were planning on updating the counter tops from yellow formica to large black tiles. Even though counter top tiles are making a comeback, I would not ever recommend using tile for a counter top. There is too much grout to have to clean (in my opinion). I actually recommended leaving the counter tops as is because they complemented the white cabinets nicely. The floors were redone and the appliances looked brand new. If the homeowner had to, they could always provide an allowance towards new counter tops to the buyer. 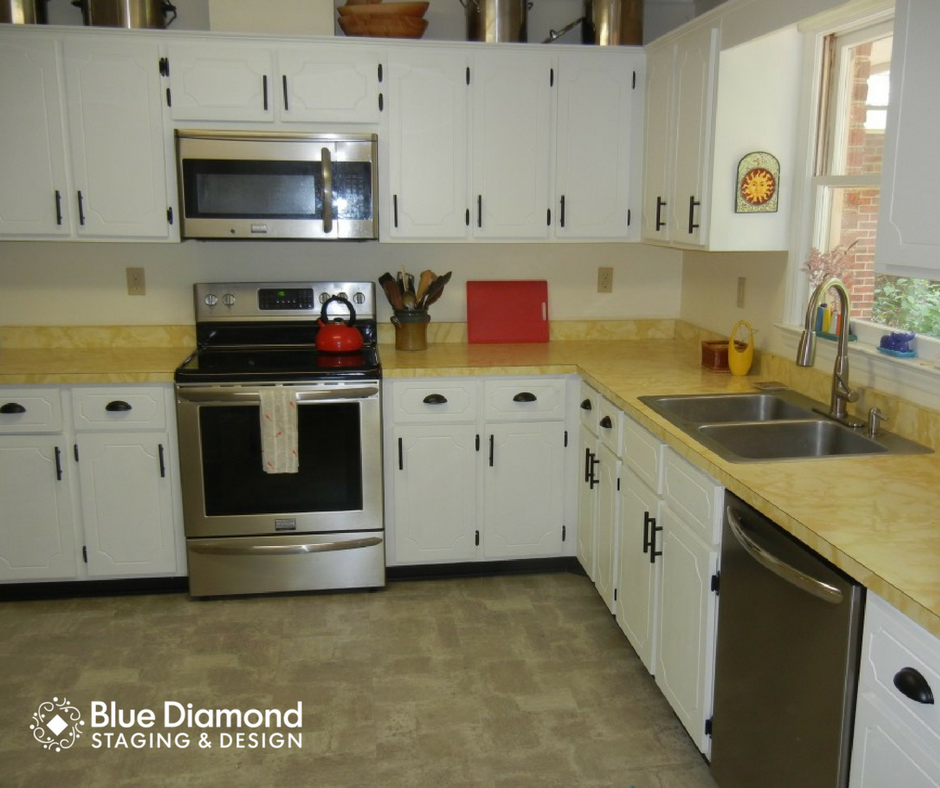 The Eat-In Kitchen was a nice size but you could not tell with all the clutter and extra furniture in there. During the consultation, I helped the homeowner remove the bookcase and stage the table. This way, she could see how much bigger the space was to show off to buyers. 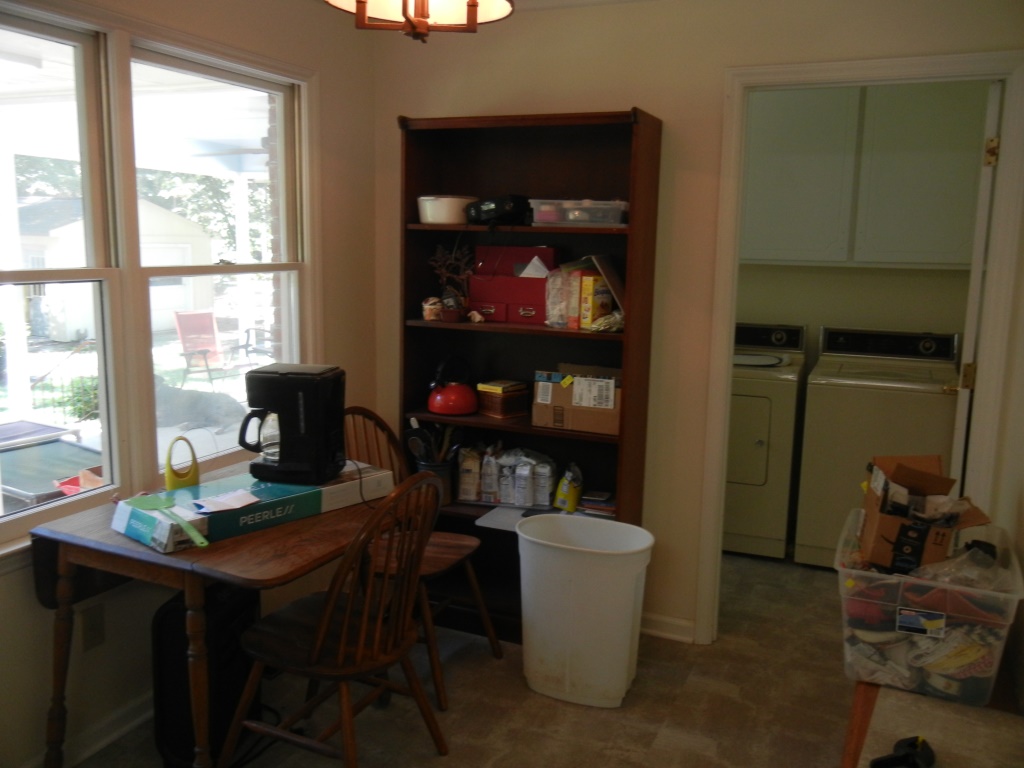 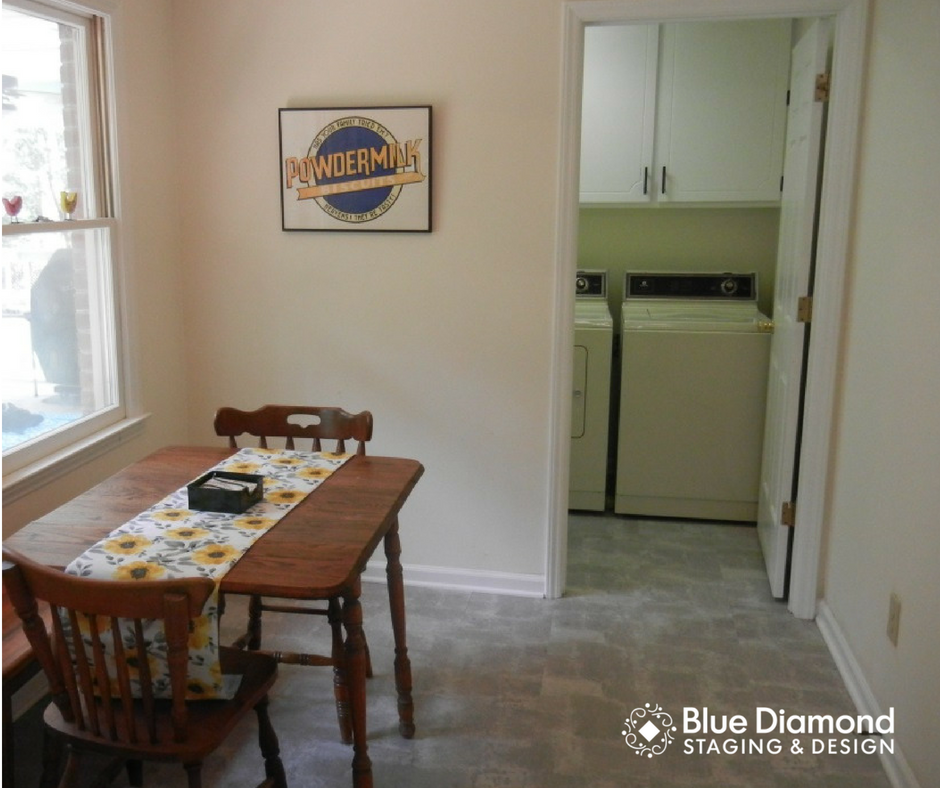 The Living Room was a large room but again it had too much stuff in it. I recommended removing any traces of their pets to include doggy beds that were in the living room. We also rearranged the furniture a bit and actually added some bookcases that were found in the dining room. While most times I recommend removing furniture, in this case, we added some to help with the symmetry of the room. Bookcases are also a better fit in the living room than in the dining room. So the bookcases were moved and also thinned out so it wasn’t jam packed with books. A firescreen, rug and artwork were rented to help complete the look and we reused the homeowners pillows from other rooms in the living room. 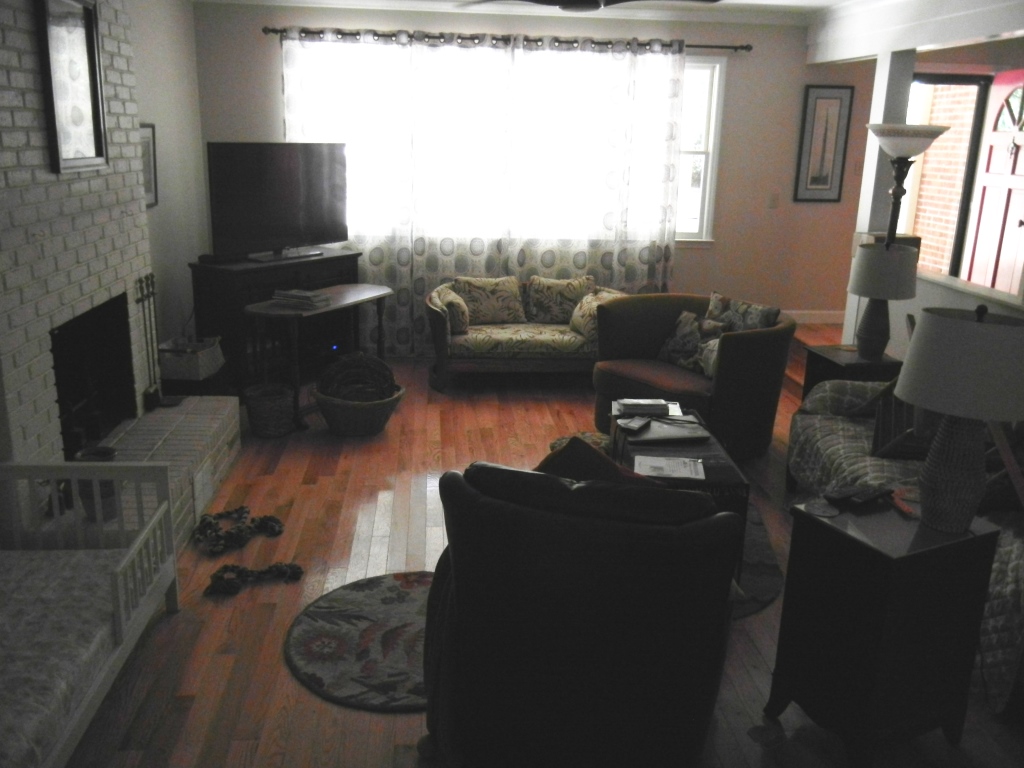 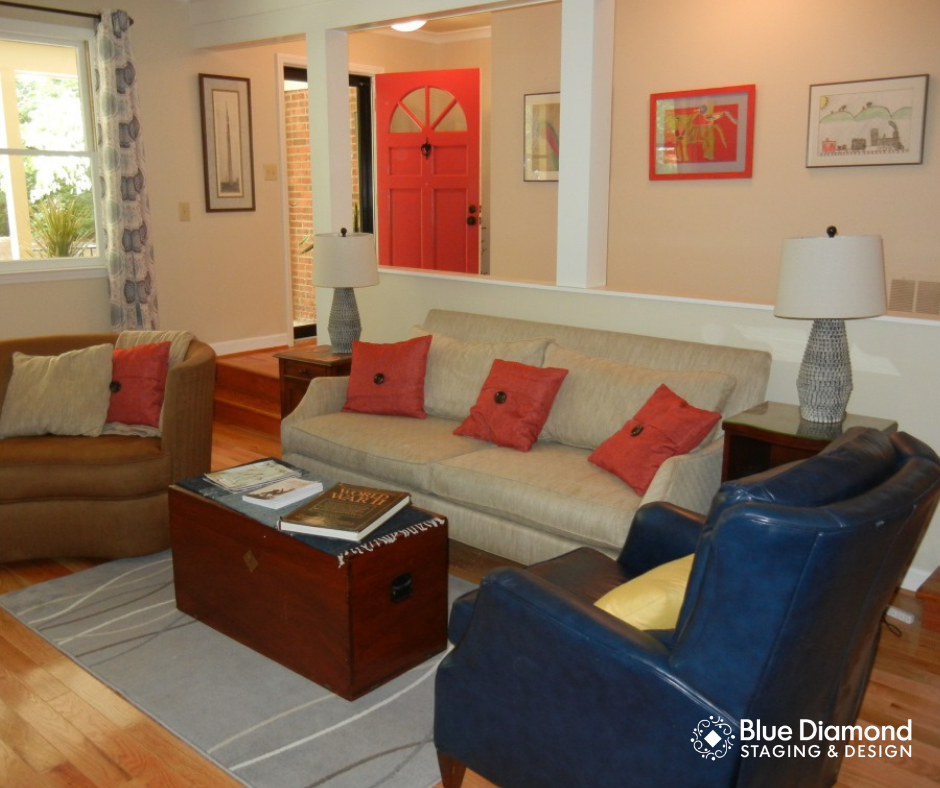 Since the kitchen cabinets were being repainted, the items inside had to go somewhere for now and they ended up in the dining room. As stated earlier, the bookcases were not in the right location in the house and we moved 2 of them to the living room. The others were emptied and removed by the homeowner as part of their homework. The table and chairs were left as well as the sideboard but we added different artwork and plants to complete the room. Now you can see how important it was to remove the clutter and make this room look as spacious as it should. 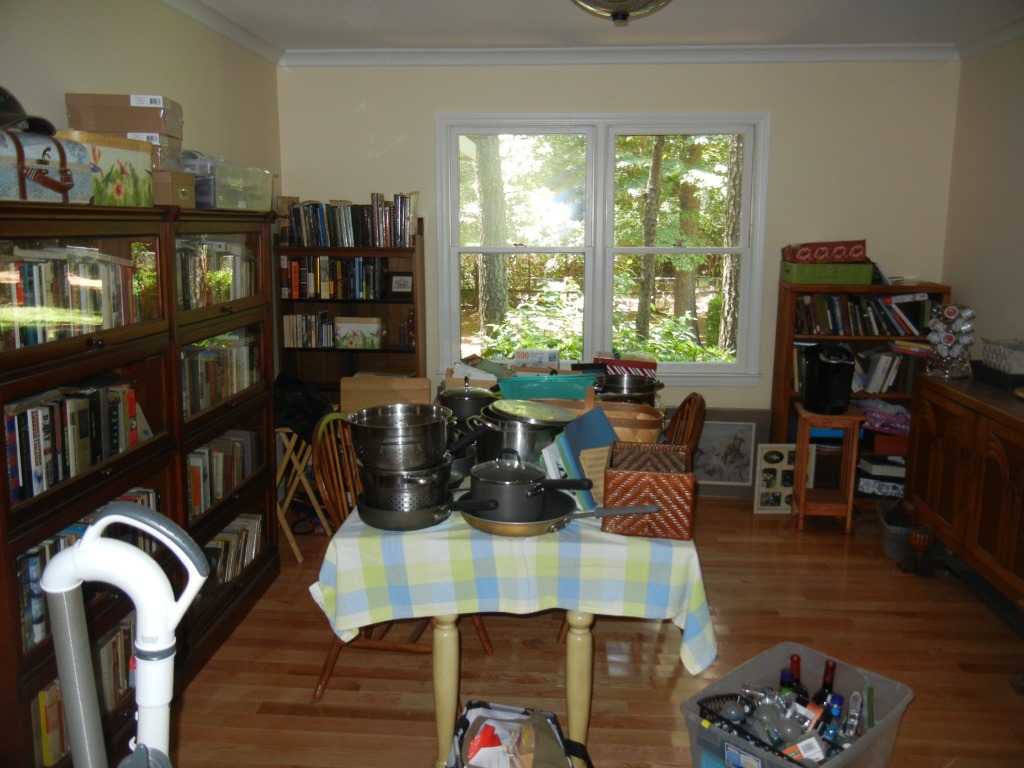 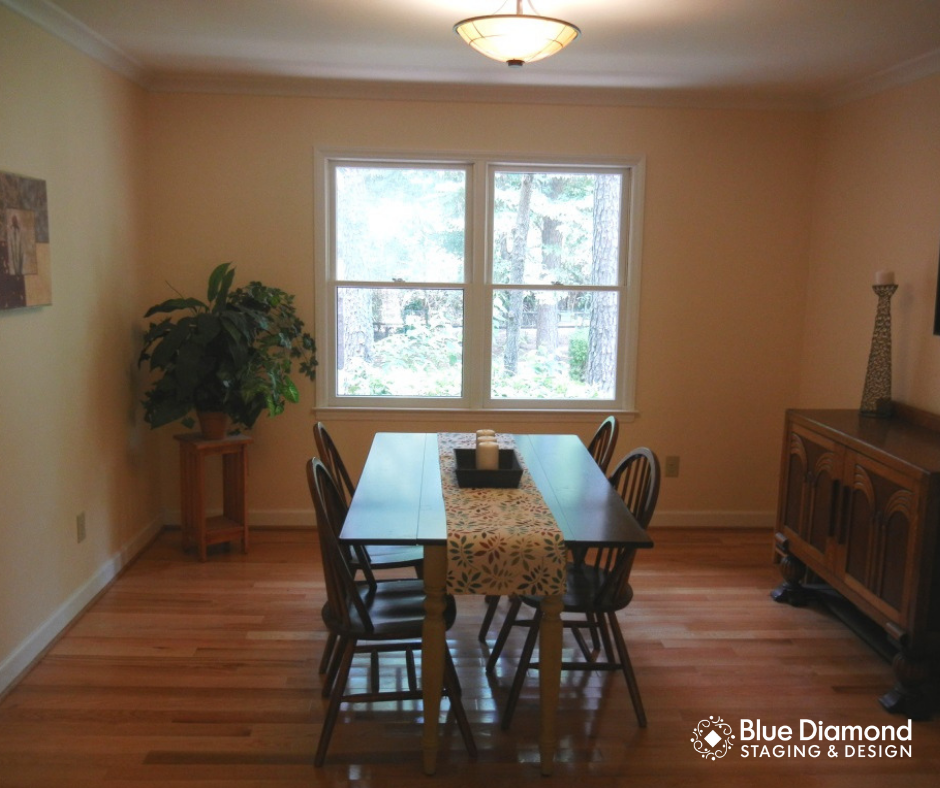 The master bedroom didn’t have a lot of work but we did need to update it a bit and make it more appealing. The homeowner bought some new bedding that she would then take with her to her new home. We also cleared the clutter from the nightstands and room and added a painting over the bed. We found matching lamps from other bedrooms and put them on the nightstand. Bedrooms tend to collect a lot of extra stuff and you either need to throw it out, donate it or put it away. You might as well get started on that since you are moving out, right? And you don’t want to pack up anything that you don’t need anymore and just takes up extra space. 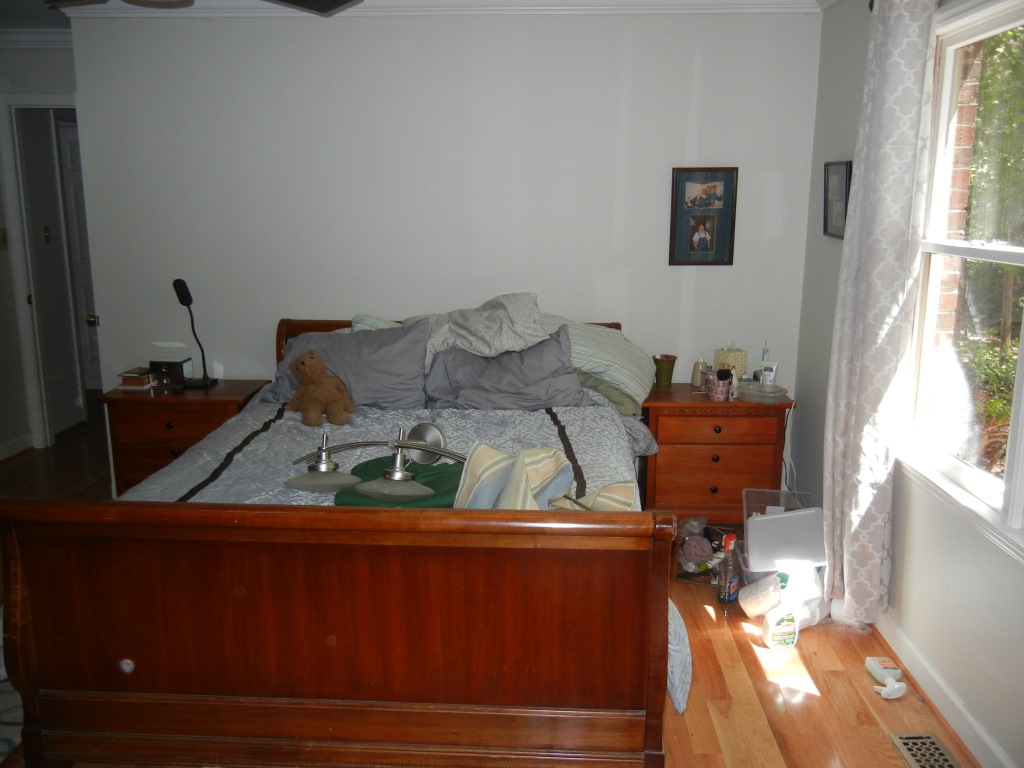 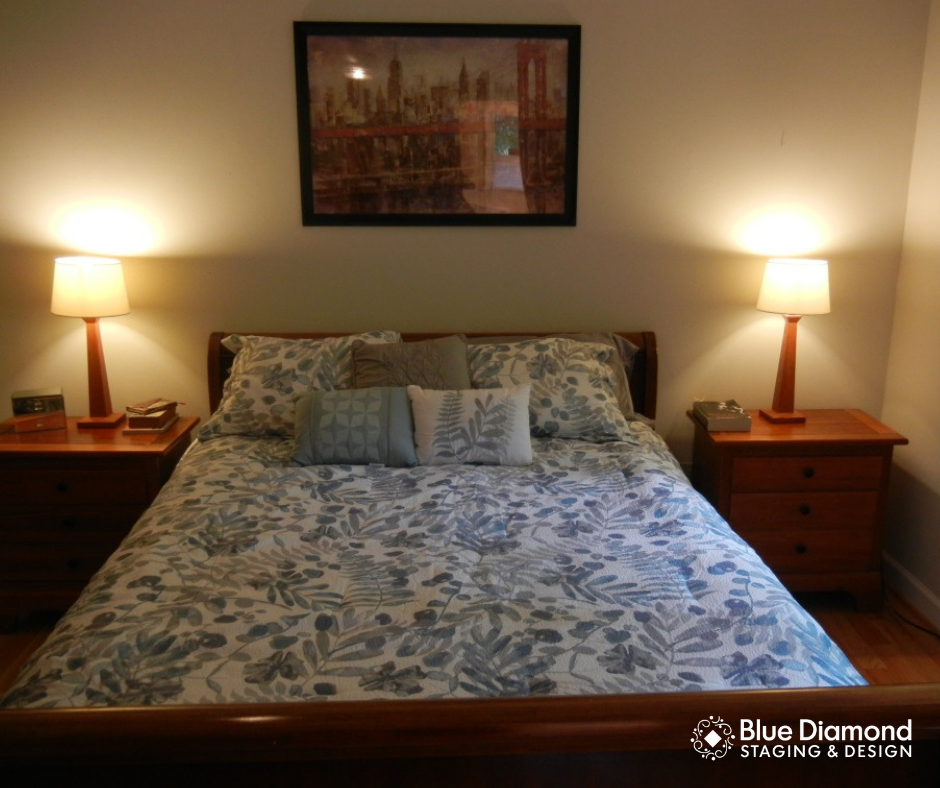 We also decluttered the other bedrooms and bathrooms as much as we could without stuffing the excess in a closet. Remember, buyers are going to be looking through your closets so stuffing them doesn’t do you any good. The homeowner knew there were items that were going to be donated so they went through and removed them before staging. We removed excess wall art and family pictures to make the home as neutral as possible. I also staged the back patio using their patio furniture and rearranged it to show off the space. When I go through a home, I will show homeowners how they can set up their room in the best light for their showings. Sometimes the room won’t look like it did before but that’s ok. It’s only temporary and you will be moving into another house soon. The homeowner did a lot of the work themselves and hired a painter, house cleaning service and a home stager to get her home ready. Per her request, I came in a few times after she decluttered a room and put in the final staging touches. In the end, she had 2 showings the night we were done staging and had 2 offers later than night over the asking price!