If you are new to the Schonaich area, there are a few things you need to know especially when it comes to food shopping. If you are an American, then some of these things may be new to you and I rather you be ready than wonder what you did wrong. Lucky for us, there are at least 3 grocery store chains in the town of Schonaich: Penny, Norma, and Frischmarkt Knittel. You can get most things there unless you need some specialty item that European markets don’t carry like marshmallows, peanut butter or mac and cheese. Those items I buy at the base commissary at Patch or Panzer. But there are a few nuances you need to be aware of before you go food shopping on the economy.

They don’t provide bags and if they do, you have to pay 10 cents for each bag. They provide shopping baskets or carts to hold your stuff, but when it comes time to bag all your stuff after you’ve paid, then you need a bag.

Pay for a shopping cart

If you need a cart, you need to bring 50 cents to a euro to deposit into the cart slot. When you return your cart, you get your money back. This is true at other places such as hardware stores like OBI, Hornbach and even other stores. The carts are stored normally outside and there is a chain that connects each cart to lock them up. Simply put in a coin and the chain will unlock. Bring the cart back and reconnect the chains to get your coin back.

Norma and Penny take Visa credit cards but Knittel does not. So bring cash to pay for your groceries.

Milk and eggs are not normally refrigerated

Some milk is in the fridge section but mostly they are kept on the shelf. Eggs also come 10 per carton not the dozen you are used to.

In Knittel, if you buy vegetables and fruit, you have to weigh them in that section and get a sticker with the cost of the item. This helps the cashier scan it when it comes time to check out. I’ve only found this at Knittel here in Schonaich. If you go to Real in Boblingen, you have to do it there too.

Also called Kasse which means cashier. The cashier scans your items and they seem to throw your stuff to the end of the line. You have to bag your own items or put them back in the cart to take to your car.

Yes you can get fresh meat on the economy but there is also a separate butcher shop if you need something different. There are at least 2 butchers in town (Metzgerei Axel Geiser and Metgerei next to La Sorrisa) where you can get fresh bratwurst, sausage and pork shoulders. I tend to buy my pork shoulder (for pulled pork) at Lidl but you can go to the Metzgerei and order it the day before you need it. Knittel also has a fresh meat counter where they have schnitzel ready to go and many other fresh meats. Penny and Norma only have prepackaged meat.

The grocery stores do have some baked goods, but you can also get them at Sehne. There is one Sehne next to Norma but the bigger one is next to Penny. The one next to Penny is also open on Sundays while the other is not. I normally will get a “rustico baguette” from Sehne when I know we are having soup for dinner. “Rustico baguette” is a really good, hearty French baguette. Sehne also makes fresh sandwiches which you could not make yourself for less if you bought everything. A ham and cheese sandwich on their kornerquark bread is 2.40 euros which is a steal! It also has lettuce, tomato and cucumber on it. Other bakeries in town include Vetter, Krone and Schimpf.

I have not found a candlestick maker but I am sure they are around. Each town has at least one shoe store, bedding store, toy store, bank, etc…you get the idea.

Grocery stores are not open on Sundays

Plan ahead for those days when you need milk or meat. There is always the option to go to the Patch Commissary because they are open on Sundays. The grocery stores will also be closed on German holidays or close early for New Years Eve. Just pay attention to those days.

If you happen to get stuck for food on a day that the grocery stores are closed, there is also a local farm in Schonaich called Hof Holzapfel. It is on a horse farm and the food is in a makeshift shed. They have milk, eggs, potatoes, noodles, cheese, meat, jelly, beer, wine and even ice cream! It is not manned so bring euros to pay for everything and a bag. 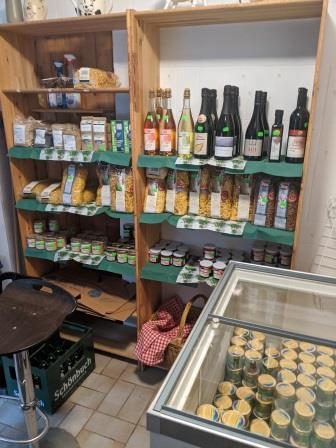 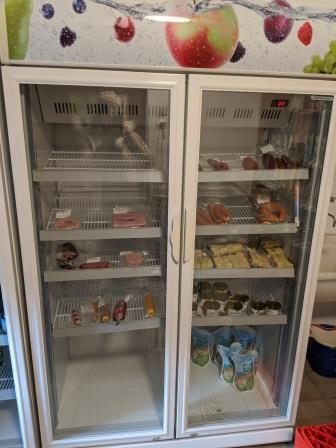 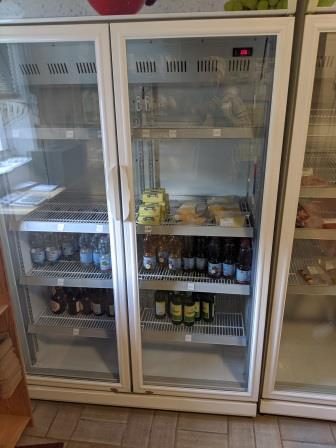 If you are looking for the bigger grocery stores, then you need to venture outside of Schonaich. Lidl, Aldi, Real, Edeka and Kaufland are the bigger ones us Americans are used to. Real in Boblingen is the bigger one that is 2x the size of a Super Walmart. This one has an International section for Japanese, Italian, American, Russia, Polish and Spanish food. I found my red beet soup at Real in the Polish section! Lidl has my favorite schnitzel that all you have to do it reheat it and add some store bought spaetzel for a fantastic easy-to-make dinner. They even have some grocery stores in the lower level of the malls at Schwabengalerie and the Mercaden. Take a look around and if you don’t see what you want at the local stores in Schonaich, I’m sure you can find it at the bigger ones.

If you happen to do a self checkout at Real, be aware that when you are done paying, you use the receipt to get out of the store. There are metal arms that stop you from leaving. In order to get out, you have to scan your receipt to show that you paid.

Knittel Frisch has a separate store for alcoholic drinks such as beer, juice, soda and wine. I prefer to go to the one at Edeka in Altdorf which is only 10 minutes by car from Schonaich. Plus that Edeka has my husband’s favorite beer (Radler by Schonbuch Brewery). They have a huge selection of other drinks as well.

You will notice at the local Penny and Norma stores there is a recycling machine. Those are for the plastic or glass bottles that have a refund on them called “pfand”. You get money back from them and the machine will spit out a receipt that you can use towards taking off money from your grocery bill from that store. Pay attention to where you bought the bottle. Sometimes only those brands sold by that store can be returned to that store only.

At Edeka, you can buy beer by the case and recycle the whole case back at once through the machine. You put the case on what looks like a conveyor belt . I’m sure you can do that at other places but again, pay attention when you walk into the stores. A whole case of empty beer bottles gave me a refund of over 4 euros! 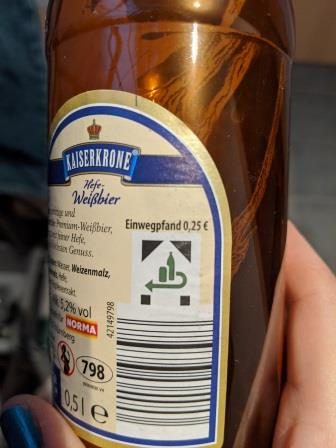 It really depends on how you shop. You may find that you only want to shop at the base Commissaries but you may want to venture out and try the local stores too. Local stores tend to have more fresh and local produce (sometimes cheaper) and some really great meat. Hope these tips prepare you for your next shopping trip!