Getting To Know Your German Home: Dishwashers

Listen to my podcast or read my lesson on German dishwashers below!

As an American living in Germany for a few years, you have to adjust a little to the way of life here. Not everything works the same way in your German house as it does in your old house in the US. Today we are going to talk about dishwashers.

Yes I know dishwashers, they should be easy right? You pop in a tab of cascade stuff, pour in some jet dry and wash your dishes. Have you noticed some of your dishes have spots after you’ve washed them?

Thank goodness there is a Facebook page called Stuttgart Friends. Luckily they post questions and this is where the salz container was mentioned in a dishwasher. Someone complained about spots on their dishes and the answer was to add salz to your dishwasher.

Adding salt to your German dishwasher

Did you notice a circular thing in the bottom of your dishwasher? It says salz on it. What is that for? That is where you put the salt in and helps soften the water to wash your dishes. I had no idea!

German water is actually hard and they don’t have whole house water softeners like I am used to in North Carolina. You add salt to the dishwasher in the small round container at the bottom. But you can’t use regular table salt here. I had to go to Rossman to find Somat salz which are large granulated salt pebbles that you pour into the salz container. Rossman is like a Walgreens/CVS in the US and you can find a box of salz there. 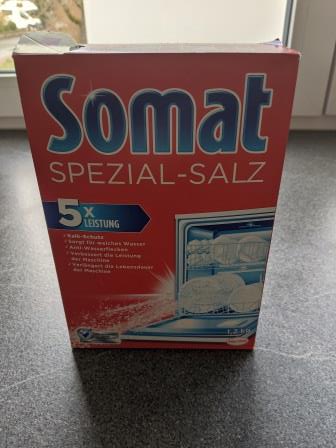 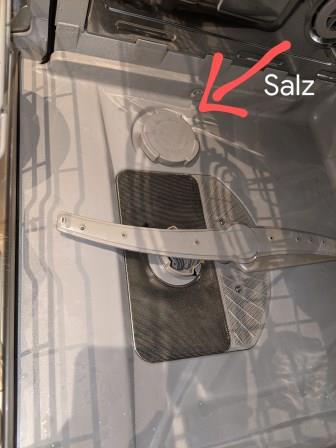 I poured in about 1/4 cup to 1/2 cup of salt in the container. There was actually water in the container so I just added some salt and will wait to see what happens. This is my first time adding salt and we’ve been living in this house for 6 months now. However, take a look at the dishwasher pods you use. If they have salt in them already, you don’t need to add salt to the salz container. This salt will help soften the water and you won’t get spots on your dishes!

Now you learned something that I didn’t know about German homes and how to use a German dishwasher. Now you know that if you have one, that you need to add salt to your German dishwasher (which is totally new to me as an American!) to avoid those water spots on your dishes. So if you ever come to Germany and have to live here, now you know!