5 Things to Know Before Skiing with Kids in Garmisch Germany

Skiing in Germany is a great experience no matter the age. We knew before the trip that this would be a learning experience for everyone. While I personally skied these mountains when I was 10, as an adult, I knew things would be different. However we kept an open mind and realized this would be more of a “let’s see how things are done here” versus being able to enjoy skiing.

Our kids (ages 7-15) learned to ski in 2018 in the hills of North Carolina. Granted, they were small hills and they had fun learning. So we knew they needed a skiing refresher course before we really got going. Since we moved to Germany, the kids wanted to “ski the Alps.” We knew the basics of having to rent skis, buying ski lift tickets, and lodging but we soon realized there were certain things that are done in the US that is different here in Germany.

Blue trails are the easy trails (equivalent to US green trails)

Red trails are the equivalent to US blue square trails and black trails are the equivalent to US black diamonds. To the right is a picture of the slopes in Garmisch. You can see that most of the blue slopes are towards the middle of the mountain. More on that in a minute. The base of the mountain has a gondola to take you up the mountain and not your normal chair lift. As you go up the mountain, you will see more chair lifts and disc lifts. To see all the Garmisch ski trails, you can zoom on this picture here.

We were located by the Hausbergbahn gondola and took that up after taking a few practice ski runs. Practice runs at this location turned out to be difficult because there was no snow at the base of the mountain. Even the magic carpet rides were not working because of the lack of snow. 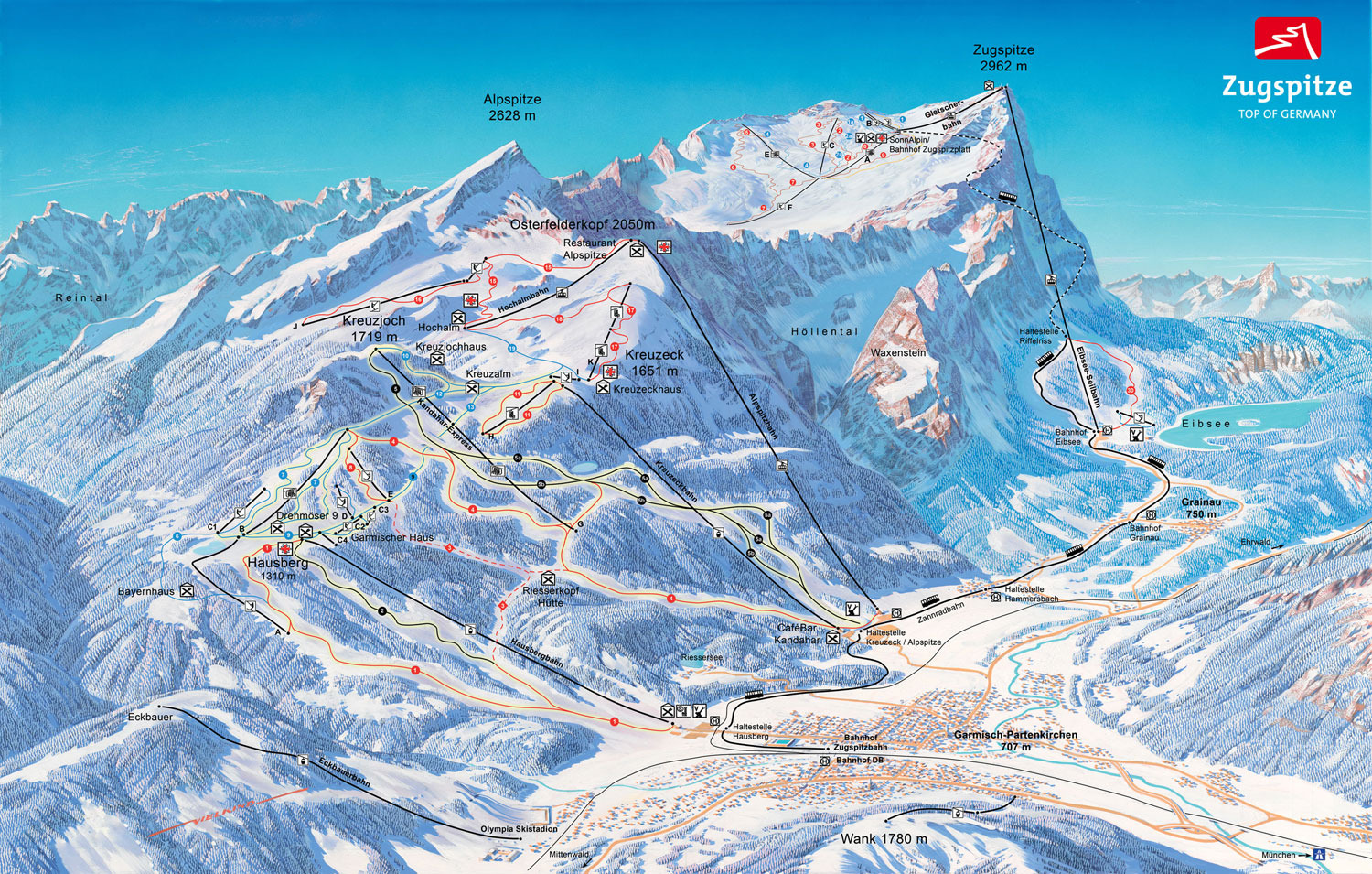 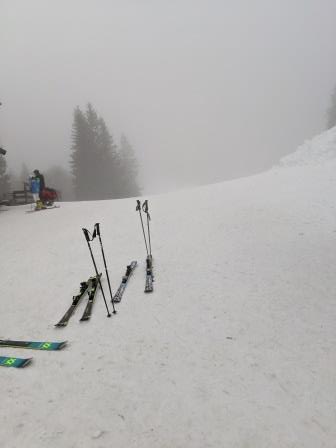 You can take the gondola both up and down the mountain

For beginner skiers, you have to take the gondola to get to the easy portion of the mountain which was halfway up Garmisch Classic. Unlike in the US, just because you take a ride up doesn’t mean you have to ski all the way down to the base. If it’s a gondola, you can take a ride back down. In fact, there is a mass exodus around 3pm from the middle of the mountain because ski school lets out and everyone takes a ride down to the base if they can’t ski down the red trail.

Unfortunately, the day we were there, the fog was so thick in the middle of the mountain by Kinderland, that it was hard to see and it was snowing heavily. So we didn’t get much skiing done that day. Don’t get your hopes up for night skiing though. There is no such thing here in Garmisch because it is a waste of electricity. Lifts start at 8am and stop working at 4:30pm at Garmisch Classic.

We like to collect the sticker passes on our snow gear, but here, they use plastic cards. You can buy them at the base of the mountain or from your local MWR (if you are military) for discount tickets. There is a family pass that covers 2 adults and 2 kids at the mountain base.

Each person must carry their own pass. You swipe it before you get on a gondola or lift and you need it when getting off at the base of the mountain too. Either bring a lanyard with a plastic sleeve to put in the card and carry it around your neck or in a pocket on your coat sleeve.

You can also get 10 euros back if you hand in your plastic passes back.

Make online reservations for your ski gear and get a discount

Ski rentals are available at the base of the mountain or you can bring your own. We discovered you can reserve skis online and at the place we used (skischule-gap.de), you get a 15% discount. Ski Schule was located at the base of the mountain so it made it easy once you parked your car. You provide all profile info online (weight, height, shoe sizes and ski level) and can reserve boots, skis, poles and helmets. An email will be sent with confirmation number.

Once reservation is done, you come into the rental location and print your order at the kiosk to print out your tickets. We decided we would try on our gear the day before we went skiing so we didn’t waste time in the morning. You can actually do that after 3pm the day before you go skiing. It was recommended that we come in right at 3pm because it gets busy at 4pm as people start returning their gear for the day.

You just bring your order tickets to the rental counter, sign them and they will assign your gear to you. You can then take the gear home/hotel or upstairs to rental storage. We stored all gear for 5 people for 15 euros for 1 night. You come back the next day and present your rental storage ticket to pick up your gear and get on the slopes! 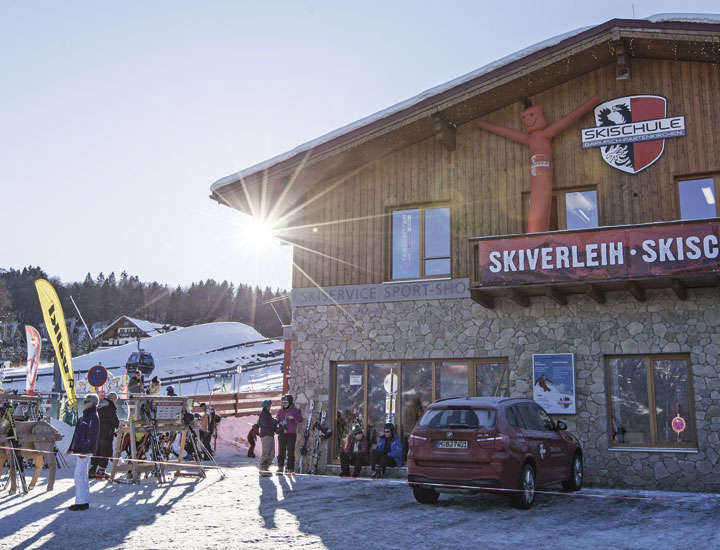 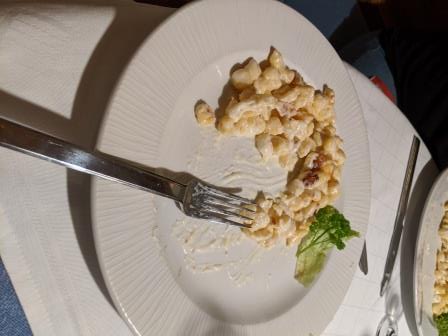 Food is actually good at the ski resort

Food is available at the base and the middle of the mountain but bring cash. Meals consist of hot dog (no bun) with fries (7 euros), soup or spaghetti with meat sauce (really good). Warm drinks like coffee, hot cocoa and tea are available as well as soft drinks and beer. There is plenty of seating indoors and outdoors and they have big umbrellas set up for outdoor use.

After skiing, Downtown Garmisch has lots of restaurants but most require a reservation. Some may be costly but it depends on where you go. Check out their menus online or outside the restaurant before you walk in. We were lucky and went in at 5:30pm when the restaurant opened to get a table for 5. They had traditional Bavarian dishes such as schnitzel and spaetzel as well as soups, salads and goulash dishes. Some restaurants don’t open until 5:30 or 6pm so be aware.

There is parking available in underground garages and downtown is mostly a pedestrian area with lots of shops and restaurants.

We stayed at Edelweiss Resort and Lodge on base but there are many other places to book a room through Airbnb or Booking.com. This resort reminded me of a Great Wolf Lodge in the US but without the water park. It was huge and had the following amenities: 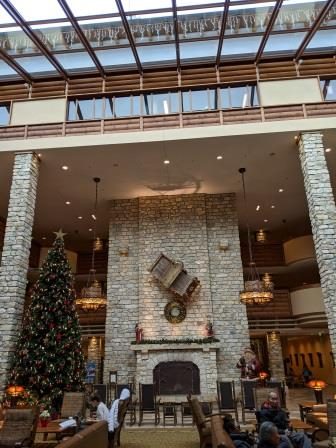 In the end, we were glad we got there the day before we wanted to go skiing so we could get a lay of the land. We learned ski rental was so much easier here than the paper and pencil form and long lines in North Carolina. The Germans have their system down and it is all electronic. They even scan your boots, helmets and skis when you check out and when you return everything.

For future slopes, we will try some other places in the towns of Lermoos and Ehrwald on the Austrian side which is only about a 20 min car ride from Garmisch. We weren’t too thrilled with the lack of easy slopes and the icy conditions at Garmisch but it was the beginning of the season. Had we known you were supposed to go to the middle of the mountain to get the easy blue slopes, we would have gone up earlier. But this is what happens when you assume things and not ask questions. We really should have asked the staff at the ski rental check out for their recommendations. But now that you know what to expect, you can set your expectations and be armed with knowledge before you show up. In the future, we will be checking out these other local slopes here so we can find which slopes work best for our family. Happy Skiing!