How to get the kids on board with home staging 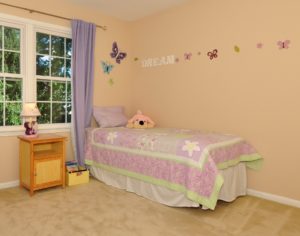 Moving and kids are probably two of the most stressful words in the English language. Put the two together and you may have World War III on your hands. I know because I had to endure that stress. You would think the world was coming to an end because we were moving the family out of state. And while it may feel that way to them at first, kids are very trusting and will look to you for comfort.

After breaking the bad news to the kids that we were moving, I knew I had to keep the trauma to a minimum. As a home stager, I knew a lot of things had to be put away into storage and that included the toys. But how do you do it without stressing them and you out? Take it one room at a time.

Get the kids involved

The kids knew that mom was a home stager and did this to other clients’ houses. They have seen the before and after pictures and knew that it makes a difference. Once I told them we needed to make their rooms’ picture perfect, they were a bit weary at first. I told them that we would make their rooms look really nice and I needed their help.

We started with the play room and I explained what needed to be removed and what needed to be moved around. The kids started to get excited and enjoyed being part of the decision process. They got to choose which toys could stay (within reason) but I had to explain that certain toys, like the 4 foot dollhouse, had to go into storage. They did get to keep 3 Barbie dolls each and some clothes but they had to fit into a storage box with a lid. All the Legos were packed up (for now) because I knew the small pieces would just come apart and cause more trouble when it came time to clean up for a last minute potential client or an open house.

Once the play room was under control, we moved into the kids bedrooms. First, all the toys were removed from the bedrooms. We looked at the bedding and made sure we used the best and color appropriate bedding for each room. They even got to choose some new sheets to make their room look even better! The only furniture we allowed in the room was a bed, dresser, nightstand and possibly a bookcase if the room was big enough. The curtains were dressed up with some pretty pullbacks and any books were corralled into a nice storage bin.

Overall, it didn’t take much convincing to get the kids on board with staging their rooms. My kids know that open houses and guests means that the house has to look spotless and they were starting to stress out. Less stuff in their rooms’ means they had less to clean up which made it easier on them as well. Get them involved early on and let them know their toys will meet them at the new house. It will be like Christmas all over again when they open up all those toy boxes.